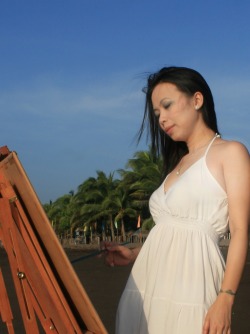 Ico Gallery artist Maria Pureza Escaño, a Filipina painter, signs another contract with the All -Japan Seamen’s Union on November 18, 2009 for a set of commissioned paintings. The contract signing took place during a meeting with Mariners’ Court General Manager Nolet Otayza at the JSU-owned hotel in Manila, Philippines.
Escaño was commissioned to paint three paintings by the Japanese-Filipino mariner’s organization to be hanged at the conference room of JSU’s new hotel in Davao. The All-Japan Seamen’s Union is the world’s largest seafarer’s organization, 80% of which are Filipinos.

Just in May of this year the Sariaya-born artist was commissioned and completed a 4 x 2 mural for the same company which now hangs at the lobby of Cebu’s Mariners’ Hotel.

“This project could not have been more timely,” Escaño says, “as I am now working towards helping raise funds for a scholarship for the children of the “poorest of the poor.” And I am just so overwhelmed with gratefulness for God’s quick answer to our prayers.”

The three paintings will all be 4 x 3 feet in size and will depict maritime scenes. They are expected to be completed in early 2010.

“I am looking forward to working again with the AJSU. I admire and am inspired by their efforts to protect the rights and improve the situation of Filipino seaworkers who are working in Japanese ships. Also they could have gotten a Japanese artist to answer to their artistic needs. Japan’s artists are outstanding. But they asked a Filipina to do it. I think this mirrors their regard for Filipino creativity and their well-meaning efforts to strengthen the bond of mutual respect between Japan and the Philippines.”

Maria Pureza Escano is currently preparing for solo shows in Manila and in New York.