THE PHILIPPINE STAR: Maria Pureza Escaño's 'Ode to the Father' 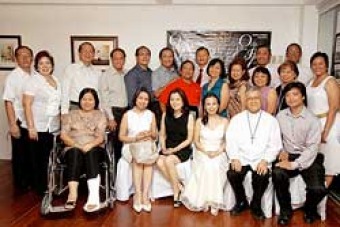 “Ode to the Father” traces its roots from a prayer poem of the same title penned by Puchette herself. In this poem, she recounts God’s blessings and how He carried her from what she calls the “dark night of the soul” into a new light and life.

Composer Jason Asistores transformed this prayer into a song and performed the song live with singer and fellow Makopa band member Nika Espinosa. Also featured were photographs by Mian Sta.Cruz.

The series in the collection reflects the artist’s search, discovery and affirmation of the inspiration behind her masterpieces — as depicted in all 16 artworks (retrospective of her paintings from 2002-2010) which are experimentations of her varying styles in realism, impressionism and surrealism, executed in either oil, acrylic, and watercolor.

Puchette’s reputation as a Filipino global artist started when she was invited to join a group exhibition at the prestigious Ico Gallery in New York from March to April 2009. She has likewise graced the local art scene via various exhibits.