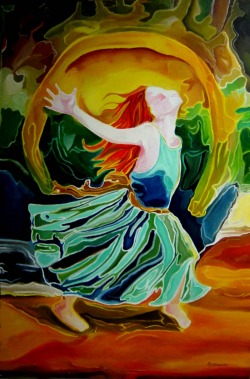 The figurative and surreal art of Philippine-based international artist Maria Pureza Escaño will be the main feature of the Sacredness of Life collective exhibition to be held from July 17 – August 4, 2009 at the FPOP Bldg, New Manila, Quezon City, Philippines.

Spearheaded by the Family Planning Organization of the Philippines, “Sacredness of Life” gears to promote and uphold life’s sanctity and clear the organization’s stand about the rights of the unborn.

Among Escaño’s works which will be featured are three of of her newest paintings – “Sunchild”, “Madonna of the Lake” and “Madre dei desideri.”

The fundraising exhibit will also showcase the paintings and installation art of veteran stage and movie actor Ernie Garcia and the art of three of the country’s most talented emerging artists Julius Legaspi, Anton Pelobello and Mian Sta. Cruz (photography). Also participating in the collective are Nannette Yatco, Lorenz Yatco (photography) and Rolando Talag.

Director Edgar Fernandez of the National Commission of Culture and the Arts will officially open the art collective.

Escaño’s growing reputation in the global art scene as a notable figurative and surreal artist followed after the phenomenal success of two shows she joined at New York’s Ico Gallery in March and April 2009. Her well-received figurative art which are characterized by soulful and lighthearted subjects and scenes are reminiscent of her classical and impressionist exposure while her surreal art features evocative dreamscapes in vibrant patches of colors either in languid almost sinuous brushstrokes or in geometric stained-glass-looking shapes – a style uniquely her own yet universal in appeal.

Escaño has been recently commissioned by the All-Japan Seamen’s Union to paint a mural for their new hotel in Cebu City. She is scheduled to have a one-man show in October 2009 at the Bliss Gallery at Hotel Elizabeth in Baguio City and a first international solo exhibit at Ico Gallery – Chelsea in April 2010.

Part of the proceeds of “The Sacredness of Life” exhibit will go to the Family Planning Organization of the Philippines and UNICEF. Maria Pureza Escaño is represented by Ico Gallery-New York, Dekada Arts-Philippines, Sining Kamalig Gallery and ARTASIA.