The Asian Journal: Filipino artist takes a "surrealistic" bite of the Big Apple 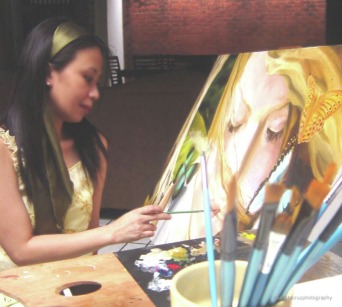 NEW YORK— Where else can you find the tonic you need to scrape off the weary edges of this city but online?

Technology paved the way for Maria Pureza Escaño, Philippine-based painter, to come out of semi-retirement and come all over to New York to meet Ico Gallery owner Dalia Chako and curator Skylor Brummans. The latter discovered her online and invited her to join other international artists in a group show last March.

“We think Escaño’s works have a unique sensitivity and delicate nature with an angelic perspective that we find very appealing and make us think of faraway worlds and beautiful dreams,” Chako was quoted as saying at the exhibit.

From that first big break, Escaño wasted no time in participating in another exhibit at the same gallery. The abstract/surreal group exhibit titled “Collide” runs from May 8 to 28.

From a body of work that consists of realistic and figurative paintings, the Filipino artist this time is expanding her range with surrealistic works.

“I want to inspire young Filipino artists to believe in themselves,” she says.

The self-taught artist has come a long way. From a small town in Quezon Province in the Philippines to New York, her second exhibit will be at the same famed art and music gallery, Ico Gallery in Soho, where she had her first exhibit last March. It was reportedly also a first for the Ico Gallery to feature the works of a Filipino artist.

Escaño is coming from a long hiatus in the art scene. Her last exhibit was in 2002 with a group of friends in Quezon Province. She stopped painting and concentrated on working for a design agency and not long after that, got married and became busy with family life.

Now she is back in the thick of it, thanks to Chako and Brummans who stumbled on her personal website and offered to represent her in the Big Apple.

“I love doing art so much that I do not see making them as work. It is rather an answer to that need inside my soul to celebrate life. My art is my praise to God,” she adds

Escaño started painting at the age of nine after seeing the works of the French impressionists--Claude Monet’s La Promenade, Edouard Manet’s Le Chemin de Fer and Edgar Degas’ The Rehearsal. “It was like a religious experience for me,” she says.

Her exposure to these works at such an early age compelled her to take up brush and easel and make a name for herself in the Philippine art world, particularly in her hometown of Sariaya, Quezon, located south of Manila.

The petite artist traces the inspiration of her idyllic, pastoral works and children captured in light-hearted moods to her upbringing in her hometown in Sariaya where the rich and vibrant culture of her Filipino-Spanish-American influences bore fruit.

“In my hometown, there was a park called Atienza’s Park, with its once-flourishing meadows and trees, that played such a critical role in my creative yearnings,” she remembers fondly.

The goal is to share with the audience a sense of beauty and peace in the works. “I want them to leave with a lightness of soul after viewing my work,” she adds.

Unfortunately, Escaño will not be able to be physically present in New York for her second exhibit, as she is busy finishing a 4x2-meter mural titled “Beachcombers at the Cebu Channel” in the Philippines for the All Japan Seamen’s Union and which will be hanged at the new Mariners’ Court in Cebu City, Philippines.

To view her works for her New York exhibit, visit http://icogallery.com. Her other works can also be viewed at her personal website, http://puchetteescano.weebly.com