the gallery of maria pureza escano 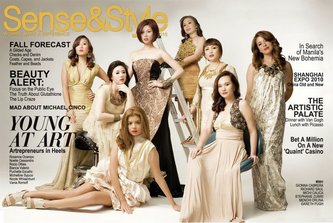 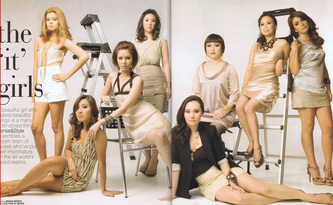 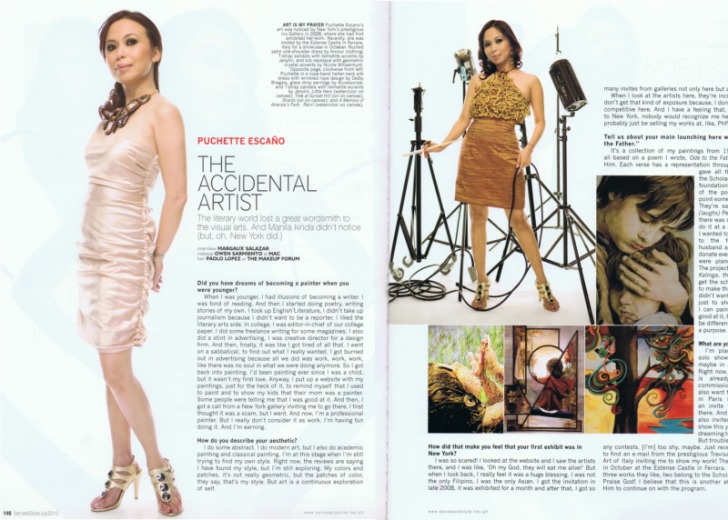 ART IS MY PRAYER TO GOD. Puchette Escaño's art was noticed by New York's prestigious Ico Gallery in 2008, where she had first exhibited her works in 2009. Recently, she was invited by Italian curator Paola Trevisan of TIA for a showcase at the Estense Castle in Ferrara City, Bologna, Italy.

Geists of the interview:

Did you have dreams of becoming a painter when you were younger?

I have been painting since I was a child but it was not my first love.

When I was younger I had dreams of becoming a writer. I was fond of reading. And then I started writing poetry and stories of my own...

I took up English Literature. I liked the literary arts side... In college and in high school. I was the editor in chief of our school paper. I did some freelance writing for some magazines. I also did a stint in advertising. i was a creative director for a design firm. And then suddenly, it was like I got tired of all that. I went on a sabbatical , to find out what I really wanted. I got burned out in advertising because all we did was work, like there was no soul in what we were doing anymore.

I put up a website of my paintings to remind myself that I used to paint and to show my kids that their mom was a painter. And then I got a call from a New York gallery inviting me to go there... I went. Now, I'm a professional painter. But I really don't consider it as work. I'm having fun doing it.


How do you describe your aesthetics?

I do some abstract. I do modern art, but I also do academic and classical painting. I'm at this stage when I'm still trying to find my own style. Right now, the reviews are saying that i have found it already, but I'm still exploring... Art is a continuous exploration of self.

How did that make you feel that your first exhibit was in New York?

I was so scared! I looked at the website and I saw who their other artists were and I was like, "Oh, my God, they will eat me alive!" It wasn't that I was the only Filipino, I was the only Asian. But looking back, I really feel that it was a huge blessing. I got the invitation in late 2008, my works were exhibited for a month (March 2009) and after that, I got so many invites from galleries not only here but abroad.


Tell us about your main launching here with "Ode to the Father".

It is a collection of my paintings from 1998 to the present, all based on a poem I wrote, Ode to the Father, a prayer of praise to Him. Each verse has a representation through a painting. I gave all the paintings (over a million peso in value) to the Scholarship of Hope, a foundation for the children of the "poorest of the poor." My husband and I decided to donate everything when we were planning the show. They say I was crazy (laughs). And people bought them. The project is under BLD Gawad-Kalinga. I wanted to make that show count. I didn't want to have a show just to show people that I can paint or if I'm any good at it. This show should be different, it should have a purpose.


What are your future plans?

I.m planning to do a solo show in New York maybe in April next year. Right now, my whole year is already booked for commissioned works and the Ode to the Father tour. I also want to try exhibiting in Paris. I have an invite from a gallery there. And Ayala Museum has also invited me to have a show this year. I have been dreaming to exhibit in Italy... Just recently, I woke up to find an email from the curator of the prestigious Trevisan International Art in Italy inviting me to show my work! The festival will be in October at the Estense Castle in Ferrara. And out of the three works they like, two belong to the Scholarship of Hope. Praise God! I believe that this is another affirmation from Him to continue on with the program.

Puchette Escano has been receiving offers to exhibit from the world's key art cities since the phenomenal success of her two shows in New York in March and April 2009. This year, owing to her busy schedule, she chooses to exhibit only in places which she finds beneficial for her favorite charity, The Scholarship of Hope of the Bukas-Loob sa Diyos Foundation. 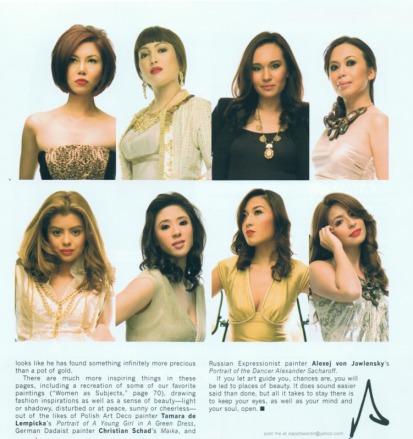 ...In this issue, SENSE&STYLE is brimming with inspiration designed not so much to take us to realms beyond the ordinary, but to make us realize that our everyday life is extraordinary enough, nothing short of a divine creation.

Overcrowded with young "artrepreneurs", whose artistic pursuits have found a match in the market's demand for unique and beautiful things, this month's cover ("The It Girls," page 132) is worth their weight in gold, the gold and gilt in which, as a sneak peek into one of the biggest colors in Fall 2010, our fashion team headed by creative director Hector M. Reyes, dressed bag designer Rocio Olbes, fashion designers Rossana Ocampo and Vania Romoff, model-turned-makeup-artist Bianca Valerio, accessories designers Michelline Syjuco and Nicole Whisenhunt, harpist Noelle Cassandra, and painter Puchette Escaño.

Young as most of them are, they have had success many of us only dream of, such as Rocio's appearance in both the British and Italian editions of Vogue and twice a year in Paris and London Fashion Week, Rossana's two-year stint with Vera Wang, Puchette's exhibitions in New York and later this year, in Ferrara, Italy. But they are young and they have so much more to give just as the world has so more to give to them. Inspiration has led thus far, that is their giftt, and my only wish is that, as they tread the path between dream and reality, they will never cease to see the wonder of it all. Alas, for some unfortunate souls, when vision comes to life, it is the end of the dream and the beginning of "reality" from which escape is often, if always desired.

...If you let art guide you, chances are, you will be led to places of beauty. it does sound easier said than done, but all it takes to stay there is to keep your eyes, as well as your mind and your soul, open.